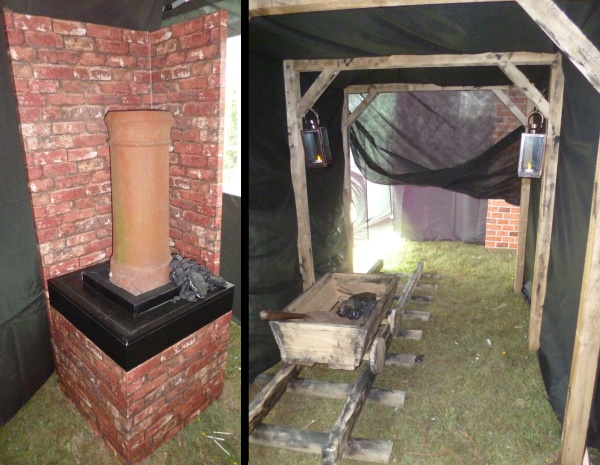 The VM_365 post for Day 353 shows the third two stages in our TimeTunnel, built for four days of school activities at Bradstow School in Broadstairs in which we trace the changes in British society from the end of the Napoleonic Wars with the Battle of Waterloo to the beginning of World War 1.

Yesterday’s post for Day 352 of the VM_365 project followed the accession of Queen Victoria to the throne, her marriage to Prince Albert, the expansion of the British empire and also took a brief look at the Crimean War.

In today’s image you can see the third two stages of our journey through the TimeTunnel into the Industrial Age. Using our specially constructed chimney, shown on the right, (which includes real smoke) we introduce our visitors to what life might have been like in our Industrial towns as more people were now living in towns than in the rural countryside. Coal was being burnt to produce steam power which in turn allowed more steam powered machinery to be used, leading to higher volumes in manufacturing of all types of goods.

Our visitors then explore where coal comes from and we emphasise that children as young as ten had full time jobs working in coal mines, often for long hours so that they could contribute to the family wage. Our modern day visitors then have an opportunity to pass through our short section of coal mine, avoiding the coal carts running on rails within the tunnel which is shown in the image on the left.

After exiting the coal mine safely (we hope) our visitors are then shown some of the major inventions of the industrial and early modern age which include the car, the zeppelin and the aeroplane; machinery that was later put to use in World War I.

Our visitors are also given a taste of the Boer War where Khaki uniforms and trench warfare are used for the first time. The circumstances of the establishment of Germany and the insecurities that the development of such a potentially powerful state caused among the other countries in Europe are then explained. The creation of new allies and friendships against the threat from the newly formed Germany are briefly introduced as well as a new fallout in the Royal family between Kaiser Wilhelm II of Germany and King George V, King of England, who were first cousins and both grandsons of Queen Victoria.