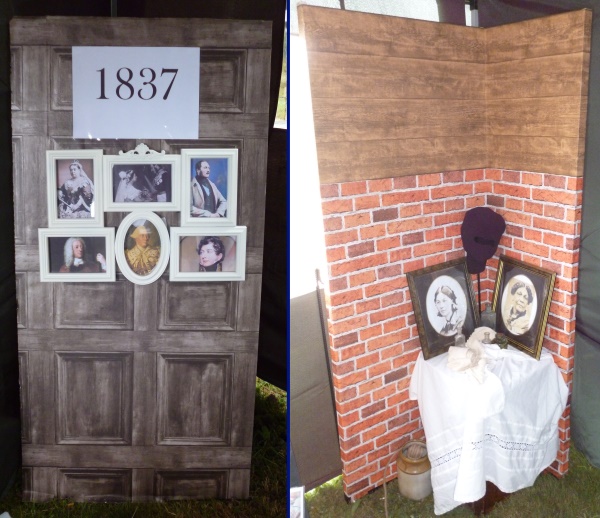 The VM_365 post for Day 352 is of the second two stages in our TimeTunnel, built for four days of school activities at Bradstow School in Broadstairs in which we trace the changes in British society from the end of the Napoleonic Wars with the Battle of Waterloo to the beginning of World War 1.

Yesterday’s post for Day 351 of the VM_365 project followed the early years of the 19th century from the French revolution to the Battle of Waterloo to what life was like for rural Britain at that time.

In today’s images you can see the second two stages of our journey through time. Using the easel shown in the image on the left we introduce Queen Victoria who came to the throne in 1837, and her marriage not long afterwards to Prince Albert, a prince from a small German state. The German origins of the British royal family are explained and also Queen Victoria’s familial relationship to many of the European Royal families. We also highlight Prince Albert’s promotion of liberal reforms and new industries and innovations from across the British Empire.

In the second vignette shown on the left we introduce the Crimean war which began in 1853 and ended in 1856.  We highlight that Britain was now allied with France as well as Sardinia and the Ottoman Empire against the Russian Empire. We emphasise the harsh conditions in which the allied troops were fighting particularly in terms of the cold winters and poor medical care and describe the contributions made by Florence Nightingale and Mary Seacole to improving and professionalising nursing of wounded soldiers. We highlight that although the two women were from very different parts of the British Empire both travelled to the Crimea to help.

On a lighter note,  in this second vignette we also introduce another item of clothing, a knitted full face covering which was designed to protect soldiers faces from the bitter cold and show the many ways in which it could be worn. This item of clothing was later named the Balaclava Helmet after the battle at which it was first worn.

More stages in our travel in time from Waterloo to World War 1 tomorrow………..