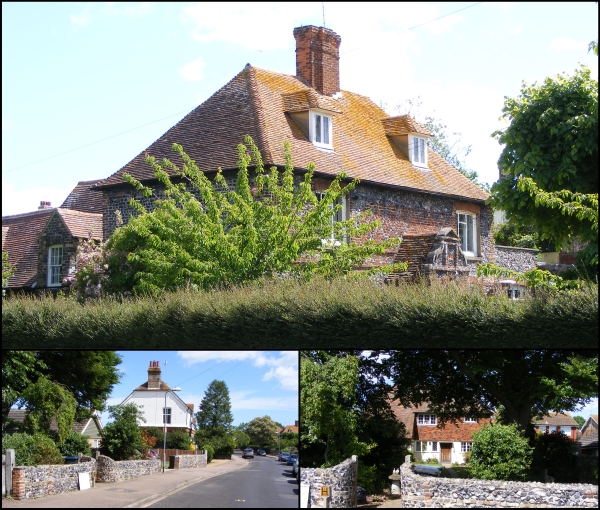 Today’s image for Day 338 of the VM_365 project continues our Hidden Hamlet series and shows the surviving elements of two farms at West Northdown, Cliftonville which are now completely surrounded by suburban development.

The main image at the top shows West Northdown Farmhouse which is located on Omer Avenue. The former farmhouse was originally constructed in 1652 and the date is recorded on the west side of the house in brick. This lovely Dutch gabled building is built of squared knapped flint with brick dressings; the first floor is decorated with red brick in a diaper pattern.

West Northdown Farmhouse was largely still surrounded by agricultural buildings and by open farm land until the early 1900’s when it is labelled on Ordnance Survey maps as being part of Dairy Farm.  A second farmyard located around 50 metres or so south east of the farmhouse is labelled as Omer Farm. By the publication of the 1936 Ordnance Survey map both Omer Farm and Dairy Farm have been sold off, the agricultural buildings demolished and new houses erected along the newly constructed Omer Avenue which extends north between the locations of the two farms.

The only surviving original element of Omer Farm appears to be a flint wall which extends along the western side of the street frontage on the opposite side to West Northdown Farmhouse. An interesting building (bottom left) is located on Omer Avenue, set back from the street front and located in what would have been one of the yards of Omer Farm. This building at first glance appears to be of a similar date to West Northdown Farmhouse but is in actual fact a cottage built in 17th century style in 1933 using old materials probably recycled from the demolished farm.