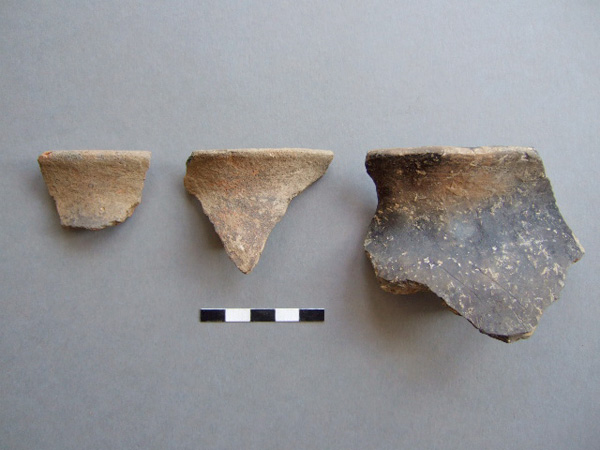 The image for Day 314 of the VM_365 project is  of examples of pottery fabrics dating from the Mid Saxon period, spanning the mid 8th to the mid 9th century.

Pottery in Kent and elsewhere in this period was mostly handmade, with small bag-shaped vessels with everted rims most common. Some had their rims more neatly and evenly finished by turning the pot on a tournette, a stick or hand-turned wheel.

In East Kent two main fabric types were employed; sandy ware and shelly ware, the latter sometimes with some additional sand added.
Most of the the Mid Saxon sandy ware products were made at sites near Canterbury, beginning a nearly 900-year long period of continuous pottery manufacture in these workshops.

The two left hand rim fragments in the image are from cooking jars in Canterbury sandy ware fabrics. A small everted rim cup in a similar dark grey sandy ware fabric featured in the post for Day146 of the VM_365 project.

The larger rim at the right-hand end of the picture is from a larger vessel in shelly ware. The small plates of deliberately crushed shell are just visible on the surface of the sherd.

All of the sherds shown can be dated to a period between c.750-850 AD  which is currently rarely represented in Thanet’s archaeological record. The relative scarcity of pottery of this period is partly due to the fortunes of archaeological recovery. Few sites have been found in Thanet’s rural and coastal landscape and all the sherds shown as well as the cup in the earlier post were from a single site near Westgate. Much of the occupation in this period will have been masked by later medieval settlement and dwellings will have been mainly wooden structures which can be hard to detect. The rather low-fired pottery is vulnerable to damage from modern agricultural or building activity.

The information and images for this post were kindly provided by Nigel Macpherson Grant.