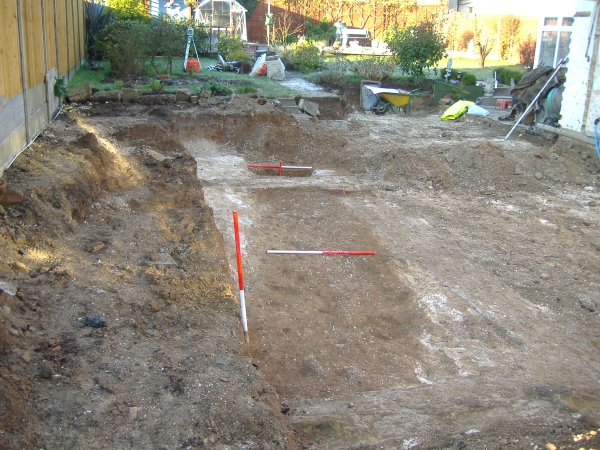 Today’s image for Day 306 of the VM_365 project shows another image from our series looking at archaeological sites revealed through the keyhole of small discoveries at sites in built up areas under Thanet’s towns, where construction work has opened a window into an ancient landscape that has been lost for many years.

The discovery was made in an area where a substantial amount of urban development has taken place, which has masked and sometimes destroyed the deposits and features that could provide evidence of the past occupation in the area.

The image shows a short stretch of an enclosure ditch dated to the Middle Bronze Age, which was exposed in groundworks for the construction of a house. The site had already been occupied by an extension that was used as a temporary police cell for a former police house and a garage.  The foundations for the  police cell can clearly been seen in the image above, located on the right hand side of the ditch before turning to cut it.

The ditch contained twelve sherds of pottery from three seperate Deverel Rimbury style Middle Bronze Age vessels. The discovery of a small surviving stretch of a Middle Bronze Age enclosure is a significant contribution to the prehistoric archaeology of the Isle of Thanet. The enclosure ditch may have formed part of a wider settlement and such features are always an important part of any attempt to map the historic occupation of the landscape.