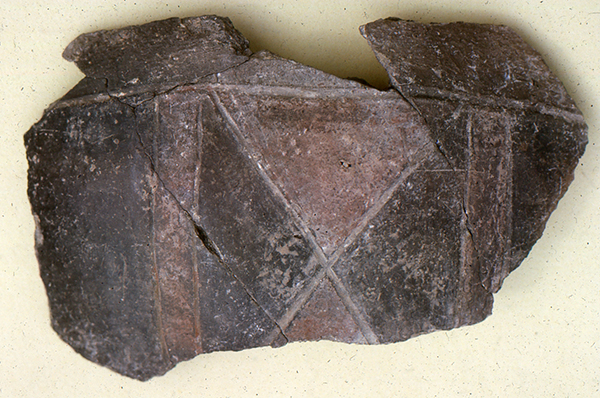 Today’s image for Day 303 of the VM_365 project shows a number of joining sherds from the upper part of an Iron Age  polychrome decorated pottery vessel, which was found in an excavation at Dumpton Gap in the 1960’s.

The image of these joining decorated sherds was digitised from a slide taken by Joe Coy, who directed excavations at the site at Dumpton. The slide is one of a small group in the same archive as the box of finds that we explored in previous posts from Day 292  to Day 301 of the VM_365 project.

The post for VM_365 Day 302 looked at the monochrome surface finishes on two Iron Age sherds, one caused by natural staining, the other by deliberate application of a black carbon pigment.  The vessel shown today exhibits a more complex decorative finish in a rectilinear and geometric style, similar to the Halstatt inspired scheme on the deliberately decorated sherd dating from the Early to Mid Iron Age. The pot is made of a dark grey fabric, whose surface is decorated  using red Iron Oxide pigment  to fill in some of the triangles and stripes that have been scored in a regular geometric pattern over the surface of the clay.

The use of the red pigment to create regular rectilinear geometric decoration is similar to that of another Early to Middle Iron Age sherd from Sarre which featured on Day 198 of the VM_365 project.

Another vessel from Margate, decorated with fields of red iron oxide pigment, was featured on Day 226 of the VM_365 project, although the decorative finish on that vessel is typical of the later curvilinear La Tène decorative style.