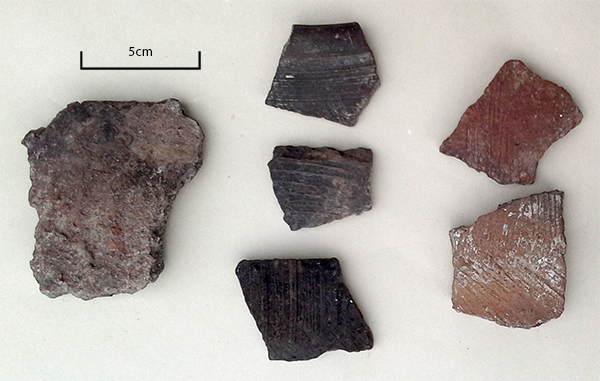 Today’s image for Day 298 of the VM_365 project shows six sherds of pottery that were present in the box of archive from a 1964 excavation at Dumpton which represent a selection from the assemblage of three common examples of Iron Age pottery which are comparable to pottery found on other sites on Thanet.

The sherd of pottery on the left hand side of the image dates from the Early to Middle Iron Age and is an example of a sherd from a large coarseware rusticated jar. Pottery of a similar type and date has been excavated by the Trust from an Iron Age settlement site very close by in the mid 1990’s. The rusticated surface finish on the vessel represented by this sherd was deliberatley applied perhaps to provide an easy grip surface on a large vessel. Alternatively the decoration may have some symbolic meaning which was explored in the VM_365 Day 169 post on some Early to Mid Iron Age rusticated pottery sherds of similar type from Margate.

The three sherds in the centre of the image are all sherds from Late Iron Age comb decorated, globular bead rim jars. Comb decoration was a technique that was frequently used in the Late Iron Age period although it had been used earlier in the Iron Age and was explored in detail in the post for Day 223 of the VM_365 project. An example of a reconstructed jar from Margate of a similar type to these sherds was featured on Day 170 of the VM_365 project.

The two sherds on the right hand side of the image are also examples from comb decorated jars although these jars would only have been decorated to just below the rim in a similar manner to the jar from Hartsdown, Margate featured on Day 224 of the VM_365 project.