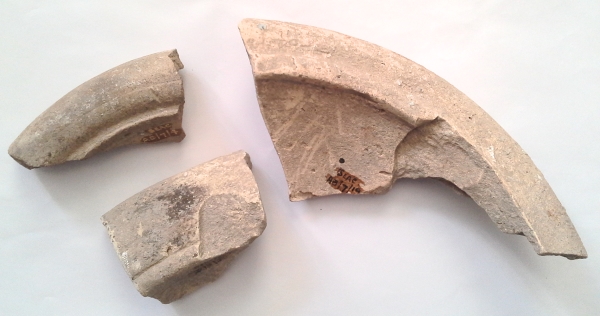 The image today, for Day 296 of the VM_365 project, is of three sherds of Roman Mortaria, giving a closer look at the types of pottery that were present in the collection of paper bags storing finds from a site archive from 1964.

Mortaria were a distinctive  type of Roman kitchen ware  made in fine light brown and buff fabrics. Mortaria were made by several Roman pottery manufacturers, many based in the region around the Roman town of Verulamium. The steep sided bowls had flat bases and a broad outcropping rim, incorporating a finely  moulded pouring spout. The interior of the bowl was roughened with the addition of sharp grits in the clay fabric.

A well established typology and dating series has been developed for these vessels, often based on the makers stamps that were pressed into the rims. The size of the vessels and the moulding of the rim vary between manufactures and can be used to identify individual vessels. At the Dumpton site the sherds of Mortaria contained in the archive box, and shown in the image here,  represent three separate vessels.

The presence of Mortaria sherds in the pottery assemblage from the site helps to identify what type of site or settlement the material may have come from and  tells us something about its status. Similar Mortaria have been found at both the Abbey Farm Villa at Minster and from a Roman building at Broadstairs, where a well preserved Mortairium was present among many vessels apparently representing the dumped contents of a kitchen.