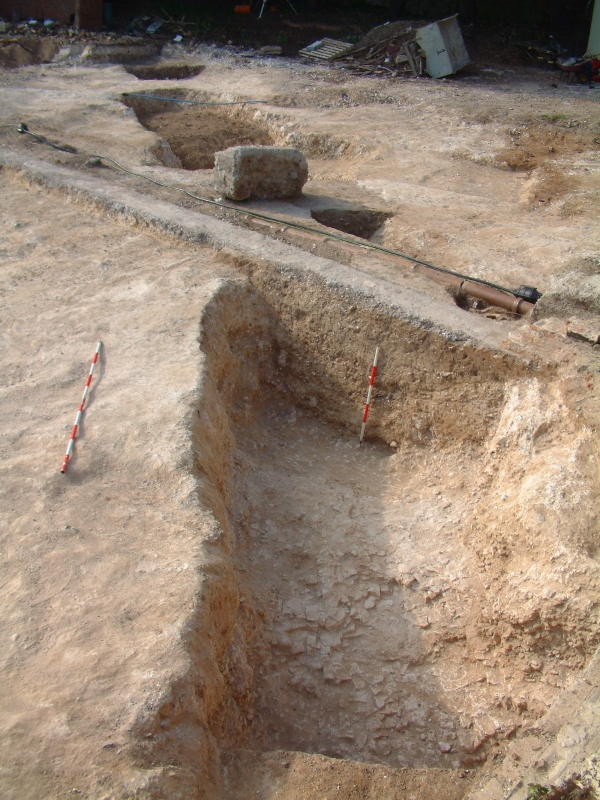 Today’s image for Day 282 of the VM_365 project shows the segment of a Neolithic causewayed enclosure that was excavated in 2007 at Courtstairs, near Pegwell Bay. What is interesting in this picture is that you can see human activity on the site spanning a period of over 5500 years.

The earliest element is the linear cut of the Neolithic causewayed enclosure, formed by the excvavation of a continuous curving line of conjoined pits. The fills of the individual cuts containing pottery sherds shown on Day 172 including some from a round based vessel shown on Day 187; finely worked flint blades and bladlets shown on Day 171 and a flint sickle that was featured on Day 173, as well as animal bone, mainly representing large cattle species.  A cow skull that featured on Day 186 was found at the base of one of the pits forming the enclosure and was carbon dated to 3636-3625 cal. BC.

Jump forward over 5000 years and you can see the concrete footing for a building that most recently occupied the site, its foundations cutting the fills of the Neolithic enclosure.  Alongside the linear concrete foundation was a drainage trench containing a modern drain and an electricity cable. In the background you can see the blue plastic pipe supplying mains water to a nearby building.

Until the early 19th century the Isle of Thanet was sparsely populated and had little development on the rolling chalk hilltops overlooking the coast, which may have attracted the Neolithic settlers to the site. The explosion of seaside suburban development has hidden many of our most significant prehistoric sites under the foundations and gardens of Thanet’s coastal towns. On rare occasions archaeologists are able to uncover some of these sites for investigation.