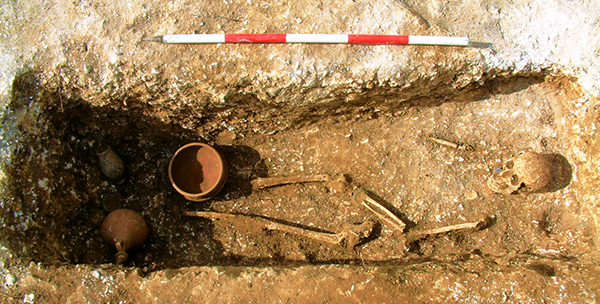 The grave was orientated north east to south west and had been heavily truncated in the past from later activity on the site. The grave cut measured only 0.3 metres deep when it was excavated.

The skeletal remains were of a young adult female, laid on her back with her legs extended and the left arm slightly flexed with the wrist resting on the pelvis. The bones of her right arm were very fragmentary and their exact position could not be determined. The general condition of the skeleton was poor as no hand, ribs, spine or foot bones survived and most ends of the long bones were missing.

The woman had been buried wearing a twisted copper alloy wire bracelet on her left wrist and she may also have been wearing shoes as twenty nine hobnails were recovered from the end of the grave in the approximate location of her feet.

Ten iron nails found around the edge of the grave suggest that a wooden board had been placed over her body. The body was accompanied by three pottery accessory vessels – a bowl, a bottle and a beaker placed at the end of the grave on top of the board, along with a second copper alloy bracelet  and a loop of wire which may have fastened a fabric pouch.

The bowl was located over the right lower leg, the loop of narrow copper alloy wire with two twists or knots which may have fastened a fabric pouch was found under the rim. The beaker had been placed on the north western side of the grave and the bottle, apparently sealed with a stopper made from a natural flint nodule, had been place on the south eastern side. The copper alloy bracelet lay between the bottle and beaker.

This burial is very significant as it complements the antiquarian records of similar discoveries in the immediate area which were published by Robert Hicks in the 19th century.