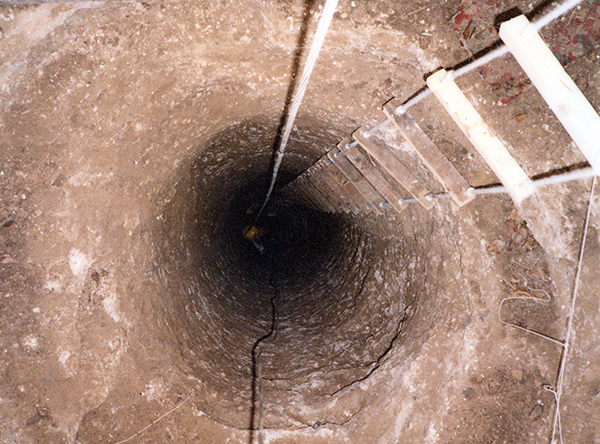 Today’s image for Day 251 of the VM_365 project shows a Medieval well shaft under excavation at Little Cliffsend Farm between 1985 and 1987.

The well head, which was lined with sandstone boulders, was discovered in 1985 when a large hole opened up in the fields above the cliff top overlooking Pegwell Bay.  The hole had been caused by the soils filling the well shaft collapsing into an open void lower down.

The backfill of the shaft was excavated by members of the Thanet Archaeological Unit under the direction of Dave Perkins and Len Jay, to a depth of more than 16 metres before the water table was reached and it had to be abandoned. If you look closely at the base of the shaft you can see the yellow hard hat of one of the excavators.

The well, dated by pottery sherds to the 14th century, was cut into the solid chalk bedrock and featured handholds in the sides, presumably cut to allow the original excavator of the well to enter and exit more easily. Similar well shafts have been exposed in the cliff face at Pegwell Bay nearby.

One thought on “VM_365 Day 251 Medieval Well Shaft at Cliffsend”