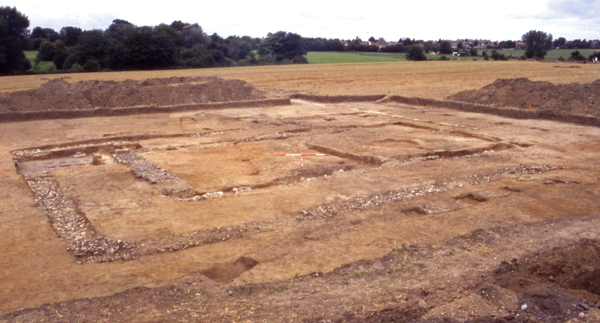 The image for Day 246 of the VM_365 project shows a  north west facing view across another of the elements of the Minster Roman villa complex, a small corridor house (Building 4). This structure stood approximately 80 metres to the south of the main villa, immediately outside the south east corner of the wall surrounding the winged villa building.  The building was placed on the southern limit of the plateau occupied by the villa and its boundary wall and outer structures. Along the top of the picture the break of slope of the plateau, leading to a valley on its western edge, is visible.  The detached  bath house shown in the post for Day_245 had been placed on this crest so its drains could discharge into the valley. The location of the bathouse in this image is approximately in line with the gap at the right hand end of the row of trees at the base of the valley.

Several phases of construction could be identified from the foundations of the structure at the southern corner of the villa compound. In the first stage a rectangular building, which was  divided into two square rooms by a central wall, had been  erected on the south side of the boundary, using the wall as the northern gable. The rectangular building was surrounded on the south, east and west sides by a narrow corridor. The small hypocausted room, which was featured in the VM_365 post for Day 243, was inserted into the south western corner of the corridor. Later the northern end of the corridor was widened and extended northwards beyond the original line of the boundary wall, which had presumably been removed.

Much of the building had been robbed of usable materials when it was abandoned in the Roman period.  The pottery recovered from the buildings suggests that it was constructed soon after the mid 2nd century, abandoned by the mid 3rd century and robbed of its building materials in the late 3rd or 4th century.  Intensive ploughing had also reduced much of the surviving structure and only the sub floor of the small hypocausted room survived because it stood in a rectangular cutting that extended to a depth below the  level of the wall foundations.

The trenches cut to remove the building materials were backfilled with soil,  fragments of  Roman brick and tile and loose flint cobbles, which had not been collected to be used again. Fragments of crushed mortar and small pieces of painted wall plaster in the trenches probably derived from the building, indicated that the small building was finished and decorated to a similar standard to the main range of the villa, suggesting it was a small detached house rather than a service building.