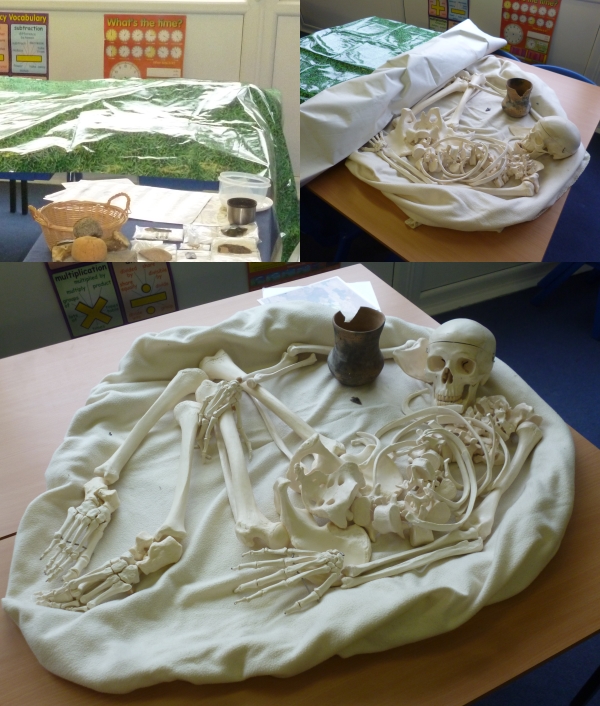 The image for Day 228 of the VM_365 project is of a resource the Trust has created for teaching some of the themes of prehistory in primary school workshops, a table top Beaker burial  given its first trial recently at a primary school in Broadstairs.  The tabletop layout includes a skeleton in a crouched position, accompanied by a replica Beaker vessel and a contemporary barbed-and-tanged arrowhead.

One element of the workshop is a discussion of pre-history as an idea, drawing out the sense that it describes periods in the development of human societies where no stories told directly by the people themselves exist. Studying prehistoric periods requires a process of investigation, based on the observation of objects and the circumstances of discovery. To generate narratives from the evidence requires imagination to draw out associations and analogies with contemporary life experiences.

The burial and accompanying objects create a detailed scenario to provoke discussion and demonstrate how archaeologists have used the detailed investigation of the pottery, flintwork and the human remains separately to provide data. Revealing the burial from under its covering of grassy topsoil (top images) adds a sense of the theatre of discovery which is such a part of the archaeological investigation process.

The combination of the artefacts and the burial into a recognisable archaeological scenario gives the children an insight into the practical circumstances of investigation where archaeologists generate their data. They can take part themselves in creating and debating their own versions of the narrative of the burial.

For an archaeologist well versed in the complexities of theoretical approaches to prehistory and the interpretative models and debates that are generated from them, it is fascinating to see these same arguments arise among such young minds based on the first principles of observation and imagination provoked by a Beaker burial presented in their own classroom.

Beyond the educational aspects of the activity, there is the opportunity to create a great deal of fun, with much ooing and aahing as the bones are revealed followed by a flood of questions and a great deal of humour. Previous VM_365 posts on prehistoric pottery and human bone themed education activities were made way back on Day 11 and Day 12