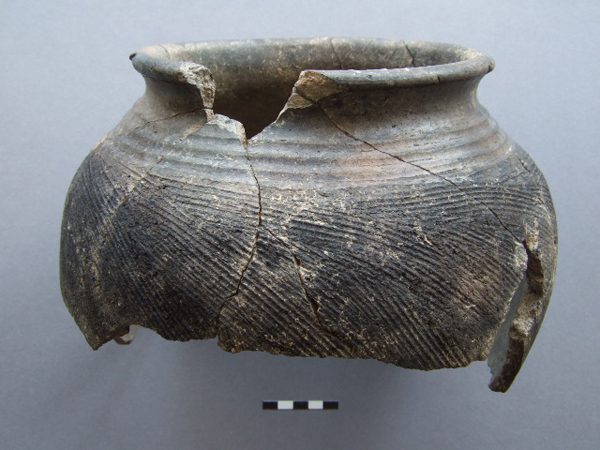 The VM_365 post for Day 224 is of the reconstructed upper body of a comb decorated Late Iron Age vessel, found in an excavation at Hartsdown, Margate.

The post for Day 223 showed how a new trend for comb decoration on vessels made of fabric tempered with grog emerged in the Late Iron Age and continued into the Roman period. Typical vessels of the new ‘Belgic’ style pottery were cooking and storage vessels like the bead rim jars shown in yesterdays post and the reconstructed jar shown today.

The jar rim is everted, a term that describes a curved or straight rim that leans outward from the upper edge of the vessel. The  vessel has been decorated with three shallow horizontal grooves at the upper shoulder, which create the impression of  raised beads. The rim and upper body are burnished to a low sheen and the lower part of the body is decorated all over with oblique curved stripes, formed with a narrow toothed comb.

Close examination of vessels of this type help to reconstruct the range of potting techniques and decorative schemes that were introduced in the Late Iron Age.