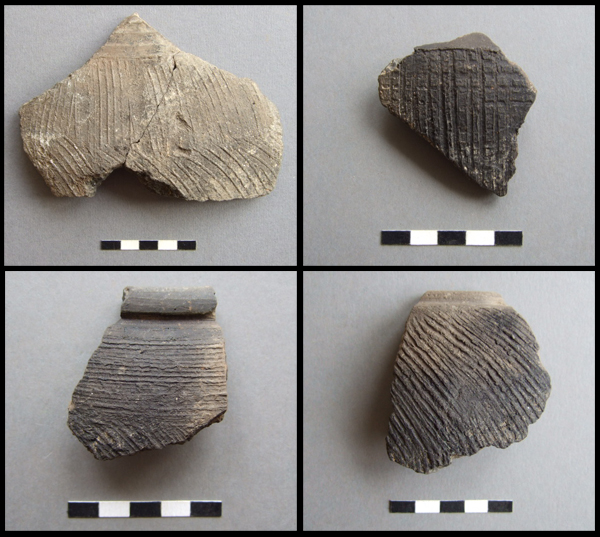 For Day 223 of the VM_365 project we have a series of images of pottery sherds whose surfaces have been decorated using a comb. All the sherds are from sites in Thanet and date to Late Iron Age, around 50  to 43/50 AD, although the comb decorated style lasted well into the Early Roman period after the conquest in 43 AD.
The post for Day 192 of the VM_365 showed a range of Early to Mid Iron Age vessels decorated using combs and other tools to create regular surface impressions. All the examples that were shown were from vessels were flint-tempered, where fragments of crushed flint were incorporated into the clay used to form the vessel improving its working and firing properties.
The tendency for potters to decorate coarsewares with linear comb-dragged finishes almost died out after around 350 to 300 BC.  The style did not re-appear until the introduction of ‘Belgic’ style pottery from the continent around 125 to 100 BC. However, the clay used to make the new style of vessels was tempered with grog, ground fragments of pottery which served the same purpose as the flint in improving the working and firing properties of the material.
Comb decoration only became a regular feature in local domestic assemblages from around 75 to 50 BC, mostly used on kitchen cooking or coarsewares. A frequent style trend is for a narrow horizontal band of combing near the top of the vessel, with diagonal or vertical combing down the rest of the body (bottom left). Sometimes the combing was shallow (top left) and sometimes the pattern was deeper and bolder (bottom right). Often the direction of the combing combined to form complicated cross patterning (top right). Jars with a small rounded bead-rim, (bottom left) are a characteristic of the period. The reconstructed profile of a typical comb decorated bead rim jar from Hartsdown, Margate was shown on Day 170, a large comb decorated storage jar from Broadstairs also featured on Day 105.