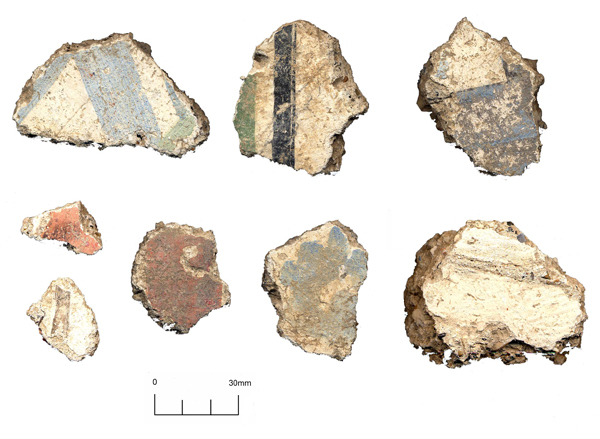 Today’s image for Day 218 of the VM_365 project shows a selection of the painted plaster fragments from the Roman building at Stone Road, Broadstairs which was excavated in 2004.

A total of 49 fragments of painted plaster were found in an extensive demolition deposit concentrated in the north west corner of the building, suggesting that the structure was a high status house.

Painted plaster in an extensive range of colours and styles has been excavated at the Villa site at Minster in Thanet,  with some of the fragments featuring in a series of previous VM_365 posts on Day 178, Day 182, Day 185, Day 188 and Day 191.

Although there are fewer fragments from Stone Road, and are generally much smaller than those at Minster,  they show a wide range of panel designs painted in hues of blue and green as well as  black. Some have suggestions of natural designs, with the third fragment from the left in the bottom row possibly representing a flower painted with blue pigment.

The excavated part of the building also contained a Bakers oven suggesting that the painted rooms were in another part of the range of buildings. Other artefacts recovered from the Stone Road Roman building  have featured as posts on VM_365, including part of a Roman spoon and a Military style belt buckle.