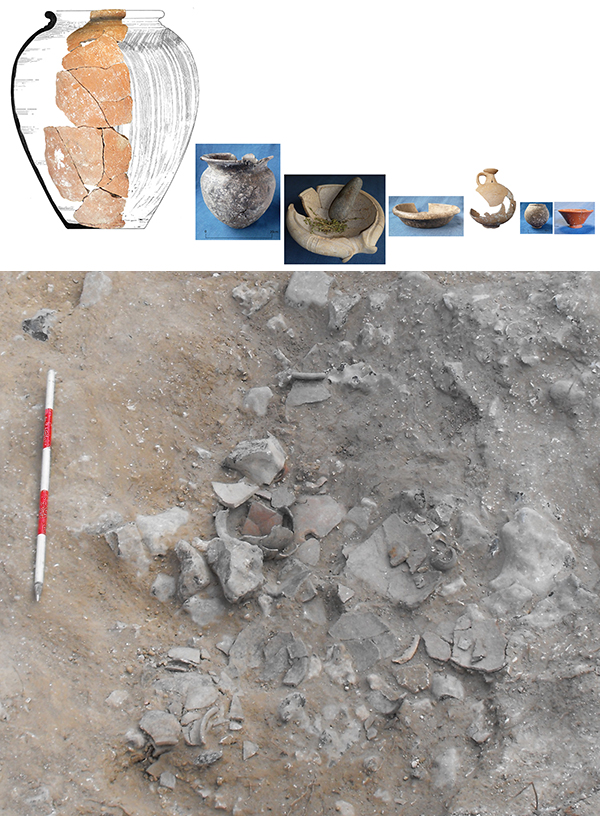 For Day 109 of VM_365 our image shows a line-up of the images of the reconstructible vessels that were present in the dump of pottery from the Roman Building at Fort House, Broadstairs. Each of the pots, a samian cup, a poppy head Beaker, a flagon, dish, mortarium and two storage jars, one small and one very large , has been shown in earlier posts which have told the story of the Roman site in Broadstairs where they were found and how the vessels were excavated and reconstructed.

The images have been scaled to show the range of sizes in the deposit and you might be able to pick out  some of the individual  vessels that are illustrated in the lower part of the image which shows a photograph of the deposit at the time of the excavation. The pottery assemblage from this deposit (context 1022) was the largest from the excavation site at Fort House, with 841 sherds weighing in at 29.815 kg.

Analysis of the forms and fabrics indicated that at least 25 vessels are represented, these include one flagon, six jars, three bowls, two dishes, four beakers and two storage jars. At least two cups were present and one mortaria. There were three other vessels that could not be identified. One of the finest pots present is a complete cup in Central Gaulish samian fabric (Dr. 33 type).

The fabric of the vessels can tell us something about their manufacturers and the markets that supplied the pottery used on the site. Nearly half of the pottery was made in hand-made ‘Native Coarse Ware’ fabric, fired in high temperature kilns to a hard finish. A quarter of the material was supplied by Roman pottery kilns located along the Thames, which produced vessels in Black Burnished 2 fabric, North Kent Fineware and other greywares. Three of the pots may have been manufactured locally and the samian cup would have been imported.

The flagon and the mortarium that have been reconstructed were products of Roman pottery kilns located in Canterbury. The Mortarium probably came from a kiln that is known to have been close to Dane John mount in Canterbury, or it may be the product of a closely related manufacturer. As one sherd from a jar made in a Canterbury Greyware fabric is the only example of  the products of the kilns of the Canterbury Greyware industry, the range of fabrics represented indicates that the date of the whole group of vessels is later than 175 AD.

The freshly broken condition of most of the vessels that were represented in this assemblage suggests that they were dumped, in one action, immediately after breakage around AD 200, or soon afterwards. The characteristics of the breaks in the pots, which often emanate from a single point where a piece is missing, suggest they might have been deliberately smashed, perhaps with a sharp object.

These vessels can reveal a fascinating snapshot of a moment in time when Broadstairs was part of the Roman world, but we will never really know the full story of what happened to create the pottery dump which has generated such a valuable trail of evidence.