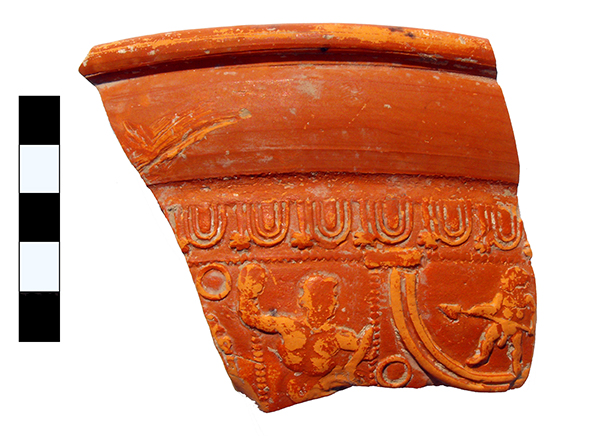 Today’s image shows a sherd of Roman samian pottery excavated from a small site near Bleak House, Broadstairs in 2009. This was one of 81 sherds of samian pottery recovered on the site representing 33 different vessels.

The piece shown is one of 11 from the same highly decorated bowl (a Dragendorf form 37) from Central Gaul, dated between 100-130 AD. The decoration is  arranged in panels divided by bead borders under an ovolo (egg shaped) border that surrounds the whole bowl.

The images on the vessel show part of a figure of the war god Mars and in a second panel in the upper half of a medallion, a nude pigmy warrior.

These motifs on samian bowls are common to Central Gaul where this bowl was manufactured.