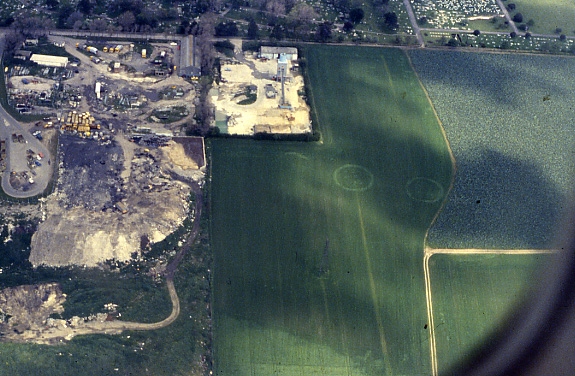 Another image today from our slide archive taken in the early 1990’s, showing how we know so much about the past of the Isle of Thanet without even touching the ground.

The image  shows the cropmarks of two ring ditches, located in the fields behind Margate cemetery and council tip. These cropmarks undoubtedly represent the enclosures of unexplored Bronze Age burial mounds, just two of many hundreds of such features that are known to exist on the Isle of Thanet and have been identified in aerial photographs.

Many unsubstantiated ideas have accumulated around the huge number of these ring ditch cropmarks and the prestigious burials they represent, including a spurious association with Procopius’s ‘Island of the Dead‘ legend. However, their frequency and survival in the landscape undoubtedly contributed to the name that was given to Thanet as a territory in the early political divisions of Kent.

In the Domesday survey of the 11th century, the Isle of Thanet constituted  a ‘Hundred’, a collection of a hundred smaller divisions of plough land called hydes. Known as the ‘Hundred of Ringslow’, the Hundred of ‘ring-mounds’, the name shows that the Bronze-Age past of the Isle had a lasting influence on the area.