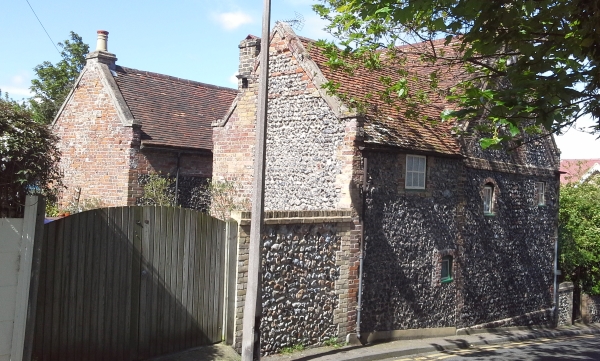 Today’s image for Day 330 of the VM_365 project shows a pair of cottages that are located in the old Thanet hamlet of Hereson, near Ramsgate.

In the medieval period the main settlement at Ramsgate was the village focussed around the parish church of St Laurence the Martyr. The town of Ramsgate developed from a fishing village in the parish of St Lawrence to a coastal port in its own right from the 16th and 17th centuries onwards. The earliest buildings associated with the develoment of the town of Ramsgate are generally foccussed along the High Street, Ramsgate and High Street, St Lawrence which follows the route from the harbour to the parish church. A grade II listed cottage with Flemish gables, one of the earliest buildings in Ramsgate, featured on Day 6 of the VM_365 project.

The medieval village of St Lawrence was surrounded by other clusters of settements within the parish, including the hamlets of Hollicondane, Hereson, Chilton, Pegwell, Haine, which were generally located close to major farms.

The pair of cottages in today’s image are located on Honeysuckle Road. These buildings are the oldest remnants of the hamlet of Hereson, which was located less than 0.5km east of the town boundary of Ramsgate.  The cottages, with kneelered gables, were originally constructed in locally sourced flint and brick in the 1600’s. The structures were altered in the 19th century.

The urbanisation of Ramsgate in the 18th and 19th and early 20th centuries expanded the developed areas of the town out from the main route to the parish church with a mixture of grand houses and mansion dwellings for the upper and middle classes as well as buildings with industries and public services essential to a growing port trade and seaside destination.   Breweries, public houses, maltings, flour mills, water towers and other public amenities and transport links began to extend outside the early focus of the port. Ramsgate began to encroach on the agricultural land that surrounded it absorbing the smaller hamlets into the urban sprawl.

However, with careful attention to archaeology of the buildings in the town, the hidden hamlets of Thanet can still be traced and many interesting and important buildings survive in the modern town.