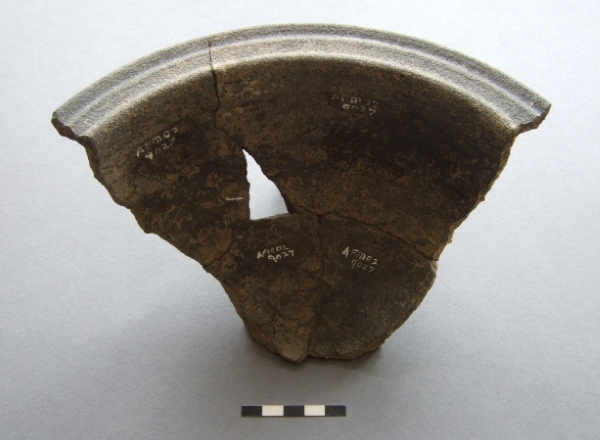 The image for Day 316 of the VM_365 project continues from yesterday’s post with our lid theme and shows part of an early Roman lid seated vessel from the Roman Villa at Minster.

The post for  Day 315 of the VM_365 project showed a rare Mid Iron Age lid used for slow cooking. Deliberately-made lids became much more common during the Late Iron Age (c.50 BC-50 AD) – and from thereon were a common item in Roman kitchens. However, the deliberate provision of rim top or inner-rim lid-seating, so that the lid rested snugly in place over what was cooking, mostly only occurs during the Roman period and from Medieval and Late Medieval times onward.

The example shown above is Early Roman and of a Canterbury grey sandy ware cooking-bowl made between c.100-150 AD. Although the rim is flat it has been provided with a series of grooves in order to receive a lid. This feature occurs regularly on contemporary cooking-bowls.

The interesting issue is – why provide the rim with two grooves when one would do just as well? Is this to accomodate unavoidable productional irregularities in lid sizes or as a ‘help-meet’ to distracted or over-busy Roman cooks – when one lid will do as well as another?

The images and information above were kindly provided by Nigel Macpherson-Grant.