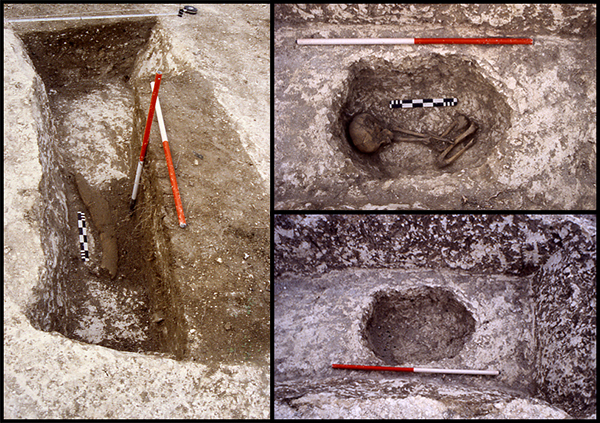 The image for Day 291 of the VM_365 project is of another of the burial associated with a small barrow, excavated at St. Stephens College at North Foreland, Broadstairs. The grave  pictured was encountered at the base of the north western arm of the barrow ditch, adjacent to the narrow causeway entrance.

The irregular,=  ovoid grave cut, shown in the bottom right of the  image, had been inserted into the base of the barrow ditch while it was  still open. The south west – north east orientated grave cut was  well defined with near vertical sides, slightly undercut at the eastern end and a flattish base.  The cut measured only 0.7 metres long and 0.5 metres wide, with a maximum depth of 0.3 metres. The upper right image shows how the skeleton had been placed directly on the base of the grave, before it had was backfilled with chalky sandy silt presumably derived from digging out the grave from the chalk geology.

The deceptively small grave suggested that the poorly preserved skeletal remain were those of a child, however it appears that the person buried was a juvenile or young adult. The body was laid on its right side, in a tightly crouched position, with the head placed at the western end of the cut, facing south east. The tightly crouched position of the body suggests that the remains had been either bound or wrapped to allow the body to be placed in the small grave cut.

A fragment of whale rib had been placed across the fill on the southern side of the grave cut,  resting partly on the edge of the cut. More material had been mounded over the grave, covering the rib fragment spreading over the edge of the cut. It seems that the Barrow ditch was deliberately backfilled soon after the burial had been inserted in the base of the ditch to seal the newly inserted burial.

The whale rib capping the grave raises some interesting questions about the form and meanings associated with the burial in the flat base in the terminal of this unusual ring ditch. Was the choice of a whale bone deliberate, perhaps having some symbolic value reflecting the waters at the junction of the North Sea with the English Channel that could be seen so clearly from the barrow’s location? Or was the rib fragment a more practical substitute for a timber to span the top of the grave to form a chamber, it wooden counterparts lost because they were less resistant to decay? Whale bones may have been rare, carrying some cultural significance, or they may have littered a Bronze Age maritime settlement having been collected from the foreshore with other useful flotsam and jetsam.

The VM_365 post for Day 30, which showed another image of this grave, gave some thoughts about how we try to understand the prehistoric remains that we encounter.