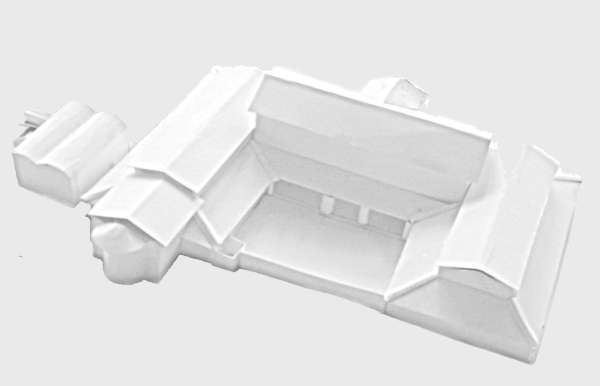 The image for Day 248 of the VM_365 project is a reconstruction of the main winged villa building at Minster in Thanet. The image is based on an architectural model of the building, based on the ground plan traced from the truncated foundations revealed in the series of excavations sponsored by the Kent Archaeological Society.   The building is viewed from the south east, across the central courtyard toward the north west corner of the building.

Although the two wings and the central range of the villa appear to be symmetrical, the east wing stands slightly further to the north than the western wing. To compensate for the offset and to link the two wings, the  central range was slightly slanted,  each room being slightly trapezoidal in plan rather than rectangular.

At some point an extension had been added to the southern end of the west wing,  adding an apse and and an L shaped tunnel to form an access from the outside to a furnace. This extension may have been a heated dining room.

Corridors on the front, sides and rear of the wings and on the rear of the main range, provided access to the series of rooms within each building range. The structural evidence indicates that screen walls blocked some of the corridors creating specific routes around the building.

The central range of buildings are fronted with a corridor and portico, linked to corridors attached to the east and west wings, covering three sides of the central yard with a roof. The yard was enclosed at some point with a screen wall at the southern end, with a gatehouse or buttress located on a square  foundation at the western end of the wall.

On the western side of the winged villa, the roof of the detached  bathhouse is conjecturally reconstructed with a pair of barrel vaulted roofs covering the various baths and heated rooms.

One of the elements that the reconstruction does not reproduce are the various chimneys and flues that would have allowed the smoke from domestic heathers, heated rooms and bathouses to escape from the roof-line of the building. Perhaps this would have given the villa a more industrial appearance than the usual bucolic views that are given in similar reconstructions of similar Roman villas.