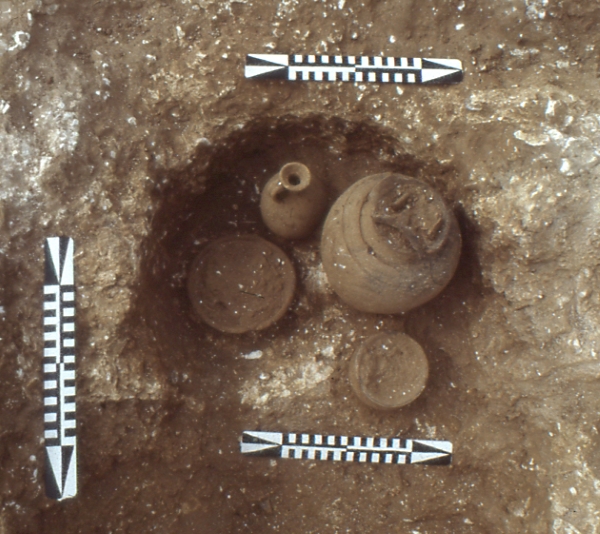 The image for Day 239 of the VM_365 project shows Grave 5 from the Thorne Roman cemetery. This cremation burial, dating to the first century AD, was excavated along the Monkton Gas Pipeline route between 1983-4.

Four pottery vessels were deposited in the grave and include a large urn, which contained the cremated remains of a child under the age of 12 years old, and three smaller accessory vessels; a small urn, a dish and a flagon.

The urn containing the cremation was a large jar in native grog tempered pottery with rough tooled chevron decoration on the shoulders. The ring necked flagon, in a pink buff sandy fabric, was made in the Canterbury district and had a three ribbed strap handle. The small beaker and dish were both made of smooth grey ware similar to Upchurch Ware but probably made locally on the banks of the Wantsum Channel.

A cremation burial in a globular amphora from the smae cemetery has previously featured on Day 236 of the VM_365 project.