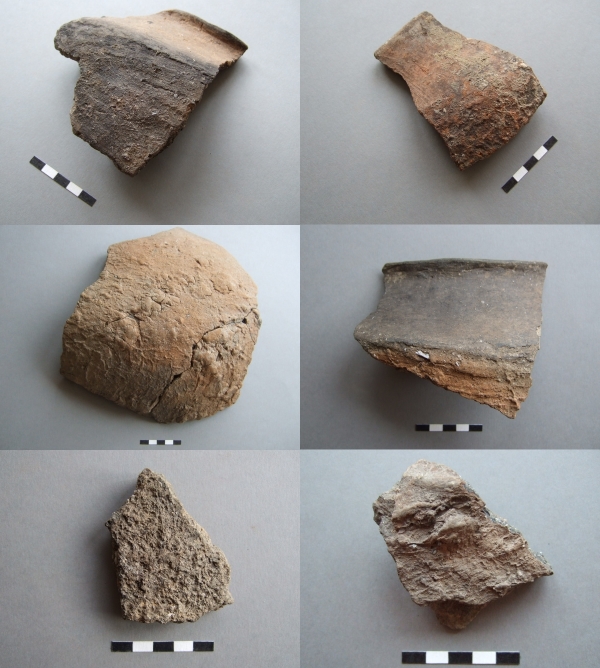 The image for VM_365 Day 169 shows a series of pottery sherds from Iron Age kitchen/storage-ware vessels from Margate, which have deliberately applied clay coarsening on the surface. The general currency of coarsewares of this type was the Early to Mid Iron Age period, between c.600 and 350 BC.

Some of the bodysherds show how the appearance of different methods of surface treatment; wet clay slurried; ‘pebble-dashed’ tacky; lumpy, sometimes produce almost bizarre surface effects on the vessels.

Some of the sherds show how the rustication tended mostly to be applied below the shoulder, although as one of the examples shows it is not always the case.

It has been suggested, with some reference to the contrast of application of coloured finishes to contemporary Halstatt/La Tene art styles, that the very evident tonal variation of the vessel finishes, the smooth and the coarse elements of the pattern, had some meaning for the maker. With the rusticated coarsewares of this type it has been suggested that the difference in visual tone represents a smooth sky or heaven above the rough lumpy surface of the earth below.

Maybe it is simply a practical innovation, without such embedded symbolism, simply making an easy-grip surface for greasy fingers on large heavy pots.