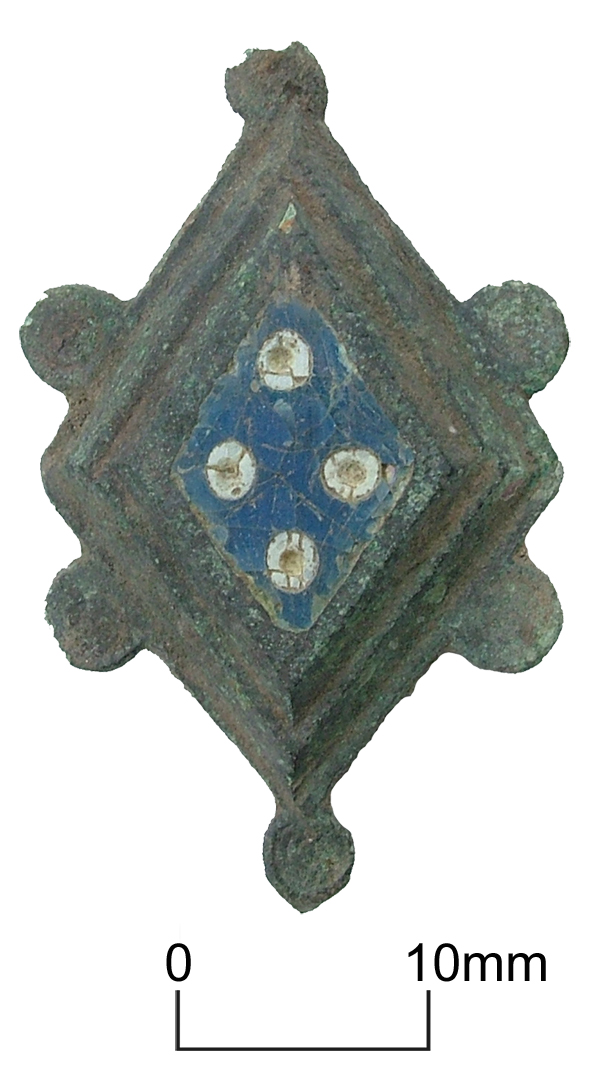 Our image today for VM_365 Day 96 is of another of the enamelled copper alloy brooches that were found at the excavations of the Roman Villa at Abbey Farm, Minster. Enamelled brooches like this were made in the later 2nd century AD.

The lozenge shaped, equal ended plate brooch, has two circular lugs at either end covering the catch plate and two equally spaced  circular lugs on either side. The brooch has been cast so  that the front rises in two stages to form a lozenge shaped cell in the central area, matching the shape of the outer edge. The cell  is filled with blue enamel with  white glass spots inset at each angle. The back of the plate is  a circular hollow between the two ends of the clasp.

The brooch was found during a metal detector survey over the plough soil of the field in 2004, while trenches were being excavated on another part of the site. A wider survey of an excavation site using methods like metal detecting or field walking can often reveal finds that have been moved from their original context, usually when cultivation of the ground has disturbed the archaeological features below. The Villa at Abbey Farm had been very heavily truncated by ploughing and general erosion, reducing most of the site below foundation level. Finds  from the wider area of the site where many of the artefacts like this brooch are dispersed can provide some information on the type and date of the archaeology that has been lost.

Other brooches from the same Roman Villa site have been shown in our posts on Day 90 , Day 89 and Day 88.