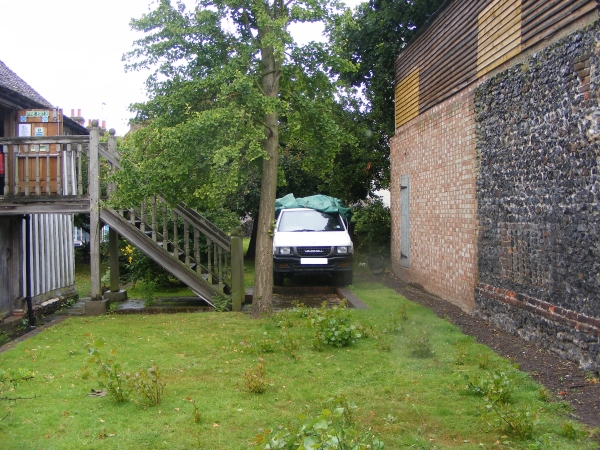 Today’s journal entry is inspired by Margate Brewery’s recent blog post about their future new premises at the High Street, Margate where they have established a 17th origin for their building which has been associated with beer, wine and spirits for most, if not, all of its lifetime.

While we are no experts in these kinds of structures, this made us think of other buildings in Margate connected with brewing and probably one of the least know standing buildings is a structure known as The Barn which is located to the rear of the Tudor House on King Street. This flint structure, shown on the right hand side of the picture, partly rebuilt in modern brick and heavily altered over the years, has been identified as a purpose built Malthouse constructed in the 17th century and used to malt barley to be used in the brewing of ale.

The Reverend John Lewis published an interesting passage in 1736 about malting and brewing in Margate:

‘…Malting is another Branch of the Trade of this Place, which was formerly so large, that there about 40 Malt-houses in this parish. But this trade also is now gone much to decay; tho’ certainly here might be the best Malt in England, the barley which grows here being so very good, and the Land naturally so kind for it. The Malt, it seems, here made, having formerly been very coarse for the Use of the Distillers, it has so much lost its Credit, that the present Maltsters find little Encouragement to make their Malt fine for a London Market, where they are almost sure to be out-sold by the Hertfordshire and North Country Malt-men, whose Malt bears a better name

About 40 Years ago, one ____Prince of this Place drove a great Trade here in brewing a particular Sort of Ale, which, from its being first brewed at a Place called North-down in this Parish, went by the Name of North-down Ale, and afterwards was called Mergate Ale. But whether it is owing to the Art of brewing this Liquor dying with the inventor of it, or the Humour of the Gentry and People altering to the liking [of] the Pale North Country Ale better, the present Brewers vend little or none of what they call by the Name of Mergate Ale, which is a great Disadvantage to their Trade ‘

The breweries being established in Margate are not so much a new phenomenon, more a return to an old local tradition of brewing fine beer.

Lewis, J. 1736. The History and Antiquities as well Ecclesiastical as Civil, of the Isle of Tenet, in Kent. Second Edition (Reprinted by Michaels Bookshop, Ramsgate)